The largest of the Balkan countries, Romania has dramatic mountain scenery and a coastline on the Black Sea.

It has seen numerous empires come and go from the Roman, to the Ottoman, to the Austro-Hungarian.

After World War II the country was under communist rule although the leadership pursued a foreign policy independent of that of the Soviet Union.

Romania, a slower developer than other former communist countries of eastern Europe, took a major step away from its past when it was one of seven countries to join Nato in late March 2004. Its strategic location and Black Sea air and naval bases make it attractive to the alliance.

There have been several complex exchanges of territory over the years, not least when the area formerly known as Bessarabia went to the USSR following a pact between Hitler and Stalin. That region now forms a large part of the Republic of Moldova.

The legacy of communist-era leader Nicolae Ceausescu, who was feared and loathed in approximately equal measure, lingered long after the uprising which brought his execution on Christmas Day 1989.

Former communists dominated politics until 1996 when a centrist government came to power. It became involved in prolonged political feuding which did little or nothing to promote economic reform. The left returned in 2000 when Ion Iliescu was re-elected president.

Failure to push ahead sufficiently with reforms meant that the country was not on the list of new EU members four years later. However, in April 2005 Bucharest signed the EU accession treaty, paving the way for Romania eventually to join the union in January 2007.

The Romanian economy suffered badly in the global financial crisis of 2008, prompting the government to launch a draconian austerity programme in 2010. This led to major street rallies and clashes with police in January 2012, which brought down the government of Prime Minister Emil Boc and ushered in a period of political instability. 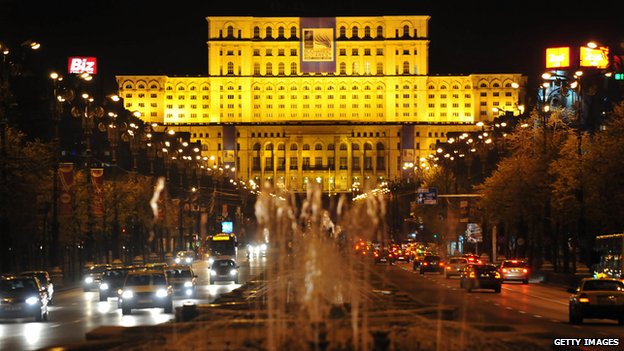 Parliament Palace, constructed at the time of dictator Nicolae Ceausescu, is reputed to be the world's second largest building after the Pentagon in the United States 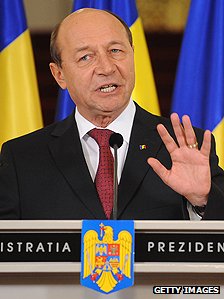 He gained a second endorsement from the electorate in a May 2007 referendum when they rejected an attempt by parliament to impeach him. MPs had decided by a large majority to remove him from office, accusing him of exceeding his constitutional powers.

The attempt to impeach the president followed tension between him and the government of then Prime Minister Calin Tariceanu over the pace of reforms.

Since he came to power, Mr Basescu has drawn international praise for his anti-corruption efforts and for preparing Romania to join the EU.

He has faced frequent challenges to his authority from his opponents in government, and has been suspended from office twice pending efforts to impeach him - in 2007 and July 2012.

In 2005 Mr Basescu started the process of opening the files of the feared communist-era secret police - the Securitate. Researchers cleared him of accusations that he collaborated with the Securitate.

His predecessor, Ion Iliescu, had dominated Romanian politics since the fall of communist dictator Nicolae Ceausescu in 1989. Under his Social Democrats, Romania entered Nato and moved towards EU membership. 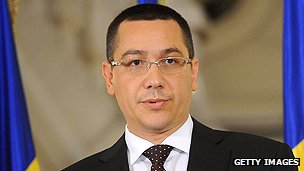 Victor Ponta has been accused of undermining the rule of law

Victor Ponta became Romania's third prime minister in less than six months when his left wing-dominated Social Liberal Union (USL) alliance took charge in May 2012 after toppling its predecessor in a confidence vote.

Mr Ponta's party, which came to power by capitalising on mounting discontent over austerity policies, won a landslide victory at parliamentary elections in December 2012.

The USL won nearly 60% of the vote, against 17% for the coalition of parties backed by President Basescu, who had threatened to use his power as president to nominate the prime minister to block Mr Ponta's return to office.

Mr Ponta has proved popular with Romanians, but he has faced criticism from some abroad who accuse him of disregard for democratic norms and the rule of law.

In his very first months in office, he courted controversy by launching a campaign to impeach President Basescu in the midst of the economic crisis, having already ousted the heads of both houses of parliament and the ombudsman. Senior European politicians and officials have criticised these steps, which threaten to isolate Romania within the European Union.

Mr Ponta also faces accusations - which he denies - that he plagiarised part of his doctoral thesis.

On coming to power, Mr Ponta promised to stick to a deal with international lenders while seeking to "correct social imbalances". Romania obtained a 20-billion-euro ($26-billion) rescue package from the IMF, the EU and the World Bank in 2009, in exchange for steps to cut public spending, which helped it emerge from recession.

Mr Ponta replaced Mihai-Razvan Ungureanu, who in February 2012 succeeded Emil Boc, who in turn had resigned amid violent protests at his government's drastic public-spending cuts.

Romania has one of the most dynamic media markets in southeastern Europe. A handful of conglomerates dominates the industry.

TV is the medium of choice, with Pro TV, Antena 1 and Realitatea TV being leading privately-owned outlets. TVR is the public broadcaster.

There is a competitive pay TV sector, and cable and satellite are key platforms for delivery. Digital terrestrial TV (DTT) has still to get off the ground.

Media freedom is generally respected by the government, says US-based Freedom House. However, politicians' hostility towards the media is a "recurring source of concern" for media watchdog Reporters Without Borders.

Around 8.6 million Romanians were online by December 2011 (Internetworldstats). There is a high level of mobile internet use. The most popular social networks are hi5, Netlog and Romanian-language Neogen.

A chronology of key events:

1600-1601 - The three historic principalities of Romania - Transylvania, Moldavia and Wallachia - are briefly united under one ruler, Michael the Brave. They had been under Habsburg and Ottoman domination.

1657 - Transylvania falls under Ottoman rule, as Moldavia and Wallachia had already done.

1683 - The Habsburgs recaptureTransylvania from the Ottoman Empire.

1711 - The Habsburgs make Transylvania a province of their Kingdom of Hungary.

1715 - Phanariot Greek governors begin to rule Moldavia and Wallachia on behalf of the Ottoman Empire, and launch administrative reforms.

1821 - After a century of Russian military incursions, the Ottoman Empire cedes Bessarabia - the eastern half of Moldavia - to Moscow and allows Russia to oversee the administration of Moldavia and Wallachia. Phanariot rule ends, and native Romanian rulers steadily gain influence.

1834 - Moldavia and Wallachia adopt a unified basic constitution, the Reglamentul Organic, which provides for their eventual unification.

1856 - Russian control over Moldavia and Wallachia ends with Moscow's defeat in the Crimean War.

1859 - Prince Alexandru Ioan Cuza is proclaimed prince of both Moldavia and Wallachia.

1862 - The personal union of the two Danubian principalities is consolidated into a new state - Romania. Prince Cuza launches an ambitious policy of economic, political, military, educational and social reform, encompassing a parliament, land reform and the adoption of a civil code.

1877-1878 - Romania wins full independence from the Ottoman Empire by siding with Russia in the Russo-Turkish War. It also acquires a coastline on the Danube delta.

1881 - Romania becomes a kingdom. Romanians in the Hungarian province of Transylvania form a National Party to campaign for their rights, but meet with repression by the Hungarian authorities.

1904 - The Romanian oil industry takes off with the opening of the first refinery.

1914 - King Carol's death ends Romania's alliance with the Central Powers - Germany and Austria. His nephew Ferdinand takes Romania into World War I on the Allied side in 1916.

1918 - As part of the peace settlement at the end of the war, Romania acquires several territories with resident Romanian populations - virtually doubling in size and population. 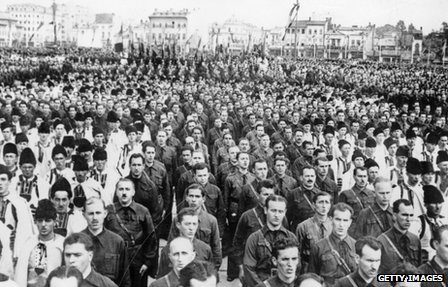 1940 - Romania cedes territory to Hungary and USSR after signing of German-Soviet pact. General Ion Antonescu forces King Carol to abdicate in favour of son Michael, but assumes power himself.

1941 - Romania fights on German side against Soviet Union.

1948-49 - Soviet-style constitution, purges of dissidents in the Communist Party. 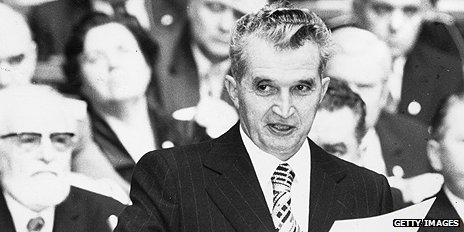 1965 - Nicolae Ceausescu becomes Communist Party leader after death of Gheorghe Gheorghiu-Dej. He pursues foreign policy that runs "independent" of that of Moscow.

1989 December - Demonstrations in city of Timisoara against the harassment of a dissident ethnic-Hungarian priest, Laszlo Tokes, trigger bloody national uprising. 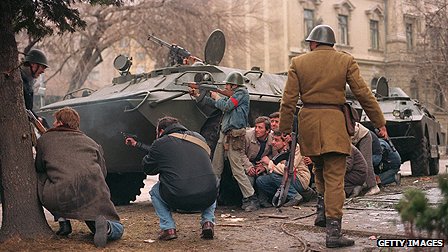 Ceausescu and his wife Elena try to flee but are caught and then executed on Christmas Day.

Student and opposition protests against the ex-communist leadership are crushed when 20,000 coal miners are brought in to stage a counter demonstration.

1991 - Riots by miners on strike over soaring prices force Roman's resignation. He is replaced by Theodor Stolojan, who sees through a new constitution.

Rise in attacks against Roma minority. 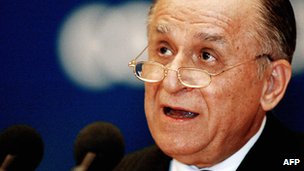 2001 January - Parliament approves a law aimed at returning to its original owners property nationalised during the Communist era.

2003 July - President Iliescu visits Russia. He and President Putin sign a new friendship treaty. Russia and Romania also issue a declaration condemning the 1939 pact between Stalin's USSR and Hitler's Germany as well as Romania's alliance with the Nazis in the early years of the war.

2003 October - Romanians vote in a referendum on a new constitution meant to bring their country into line with members of the European Union.

2004 October - President Iliescu ends decades of denial by admitting Romanian complicity in Nazi-driven Holocaust of World War II when hundreds of thousands of Jews and Romanies were sent to their deaths by the country's fascist leadership.

2005 April - Romania signs EU accession treaty, putting it on course to join in 2007 provided reforms are implemented in time.

2005 December - US Secretary of State Condoleeza Rice visits, signs agreement which will allow US to use Romanian military bases. 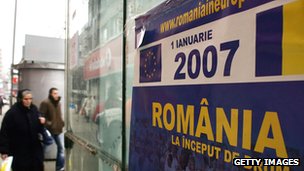 Romania became an EU member in 2007

2006 February - Former prime minister Adrian Nastase is charged with corruption. He insists that he has done nothing wrong.

2006 September - European Commission confirms that Romania - and Bulgaria - will join the EU at the start of 2007, although under strict conditions.

2007 January - Romania and Bulgaria join the European Union, raising the EU membership to 27.

2007 April - Parliament votes to suspend President Basescu on the grounds of abuse of office.

2007 May - President Basescu survives a parliamentary bid to impeach him when he wins the backing of voters in a referendum.

2007 June - European Commission calls on Romania to do more to combat corruption.

2007 October - EU threatens to withhold farm aid if Romania does not reform its agricultural payments system.

2009 March - The International Monetary Fund and other lenders agree to provide Romania a rescue package worth 20bn euros.

2010 May - Government announces package of austerity measures that includes large-scale cuts to public sector wages and pensions. Tens of thousands of public sector workers in Bucharest protest against the plans.

2010 June - After Constitutional Court rules that 15% cut to state pensions proposed by government is unconstitutional, PM Boc says alternative is to increase VAT to 24% in bid to trim deficit and secure IMF bail-out loan.

2010 July - Implementation of sweeping austerity measures - including 25% cuts to public sector wages - leads to wave of strikes and protests. 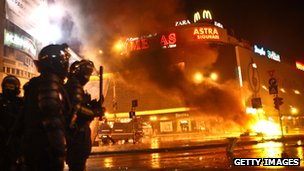 Austerity measure prompted protests and clashes with the police

2011 June - The Netherlands plans to delay until next year any decision on whether to let Bulgaria and Romania join Europe's passport-free Schengen zone, despite a European Parliament vote to let the two countries into Schengen.

2011 October - Former King Michael addresses parliament for the first time since he was forced to abdicate in 1947.

2012 January-February - Protests against austerity measures and corruption lead to clashes with police and prompt the resignation of Prime Minister Emil Boc. Foreign Intelligence Service Chief Mihai-Razvan Ungureanu takes over as head of the same coalition.

2012 May - Victor Ponta becomes prime minister when his left-wing Social Liberal Union alliance topples the Ungureanu government in a confidence vote. He seeks to soften austerity terms in negotiations with the European Union, and begins a campaign to oust his political opponent President Basescu.

2012 July - President Basescu survives an impeachment referendum, as it fails to reach the minimum turnout figure of 50% of the electorate.